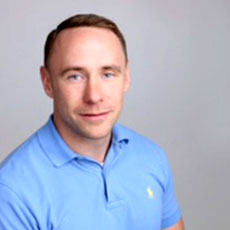 Prior to training as a Physiotherapist Glen worked in the fitness industry as a trainer for gyms and sports teams. He qualified as a Physiotherapist from the University of Keele in 2005. He spent his first 2 years working for a busy MSK private clinic in Iceland, before returning to the NHS and completing his MSc in Neuromusculoskeletal Physiotherapy at the University of Hertfordshire.
Since then he has worked primarily in private clinics and sports injury clinics in and around the London area and opened his first clinic, Hemel Physio, based in Hertfordshire in 2013. At his Clinics he has treated Olympic level athletes and professional sportsmen. A large percentage of his private caseload is made up of recreational and club level endurance runners, particularly marathon runners.
Glen’s main passions are manual therapy, functional movement screening, injury prevention and exercise prescription. He has mentored and trained many therapists in manual therapy and is involved in the creation and development of strengthphysio.com, an online CPD training portal for physiotherapists, personal trainers and health professionals.
Glen has a particular interest in the lower limb and started teaching on evidence based injury prevention in runners, integrating strength and conditioning with the rehab of runners and Assessment and treatment of the Hip in 2012 through Physio UK. http://www.physiouk.co.uk/tutors.php#297
Glen got into Physiotherapy after the care he received following a back injury when he was a teenager. It was this experience that inspired not only his career but a love of exercise that he maintains to this day. He lives in the local area with his wife and young sons.